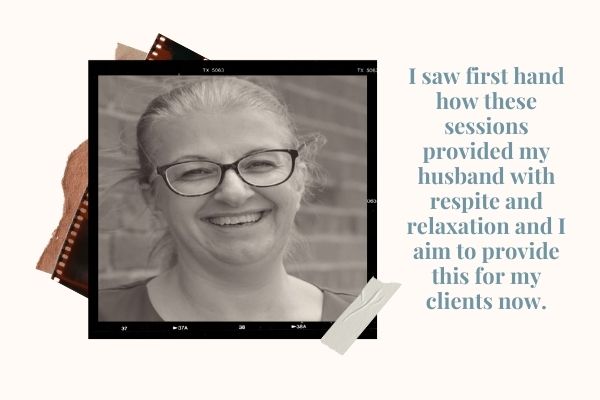 Becca worked as a registrar and then had a variety of administrative roles that fitted in around raising her children.  Ten years ago, her husband, John, was diagnosed with terminal bowel cancer and sadly died eight years ago.  During the two and a half years of his illness, John received reflexology at the Helen Rollason Cancer Centre.  Becca tells me, “I used to take my husband to the treatments and usually just had a cuppa in the lounge while I waited.  One day a therapist had a free hour and offered me a treatment.  I told her I didn’t like anyone touching my feet, but she managed to persuade me to give it a go.”

After losing her husband, Becca says it took her a long time to get herself back in a good place.  “I worked in a school for children with special educational needs.  I loved it but it was every day right in the middle of the day so it didn’t really fit in with other things I was doing.  After leaving there I took a little time to decide what to do and decided to reassess what I wanted from life.”  As well as her now grown-up children and grandchildren who all live with her, Becca also helps care for her mother.

“I considered going into business with my daughter who is a hairdresser but then reflexology popped into my head again.’  Becca says she had heard of Phoenix and knew friends who had received treatments with the trainee therapists, so when Phoenix came up as she was doing an internet search for courses in the Chelmsford area she looked into what they could offer.

“The course was starting within two weeks, and there was a space, so I thought – this is a sign!  I took a deep breath and I applied.”  Becca’s training began in February 2019 and she qualified this summer, with a slight delay because of Covid 19 restrictions.  She said, “It can be a bit of a madhouse at home with my children, grandchildren and the dog, but with Phoenix, I was able to fit the training in around family life.  I was concerned that I had not done any studying for so long, was I going to be able to cope with it?  But the resources are all there for you and we work in groups.”

“At Phoenix, you are educated in running a business as well as the treatments.  You learn the codes of conduct and health and safety.  After your practical assessments and assignments, there are the case studies and the anatomy and physiology exams.  You are encouraged to become a member of the Association of Reflexologists.  It was exciting at the age of 52 to be achieving letters after my name and it is reassuring for clients to know we have been trained properly.”

Becca says that with all the restrictions during the lockdown, being able to give treatments that involve touch is of great benefit to clients both physically and mentally.  “I thought I’d like to add one or two more therapies, and so I have now trained in Mian Dui Facial Ritual.  It appealed because it includes facial reflexology and acupressure, scalp massage, lymphatic drainage and finishes using crystals and chakra alignment.  I’m now about to start the Indian Head Massage training.”

“Phoenix gives you the opportunity to offer therapies to such a wide variety of people coming in for treatments from all walks of life.  This sets you up for when you start your own business and are meeting new clients.”

“I had to undertake one hundred hours of case studies with fifteen clients for reflexology.  That helped my confidence so much.  I had been suffering from anxiety and I would get stressed about going out, but with my case studies, I could think that they were giving their time to help me train so it gave me a bit of drive.  Not only do I now have a new career, but it has helped me overcome my own mental health issues.”

Becca says that since launching her own business, Chrysalis Complementary Therapies, she has expanded her client base to include those who were case studies, by word of mouth and using social media.  Reviews on her Facebook page reflect this with clients saying, “So relaxing and still feeling the benefits today after a great night’s sleep.” “My first reflexology session and it was amazing. Learned so much and the feeling of wellbeing is incredible.” and “I have had such amazing benefits from receiving reflexology. I also found that my anxiety was eased as well, and being shown hand techniques I can use when I feel myself becoming very anxious has really helped.”

Becca concludes “Knowing how I enjoyed the reflexology I want to be able to pass that on to others.  My aim is to enable anybody to be able to try the treatments and benefit from them because I did, and I know my husband did too.